January 19, 2014
Let me set the scene.  Imagine it's two years ago.  I was just starting this blog and had become obsessed with indie polishes because I liked the glitter.  Then, on the horizon, comes a magic collection of "flakie" polishes.  Why would you care about flakie polishes?  Well, they were these plain looking bottles of weird shaped glitter that just happened to explode with amazingness when you put them over a black polish.  Unfortunately they were only sold at Sally Beauty store and I missed out on all but two of them.  Given they were sold on ebay for up to $70, I never got to complete the collection.  I very nearly actually died when I found out that Finger Paints were doing another collection of flakies, the Kaleidescope Collection.  So much so that I made my friend Kirsten drive me to a Sally's in Etobioke when I live downtown.  Let's take a look at the full collection, now, shall we? 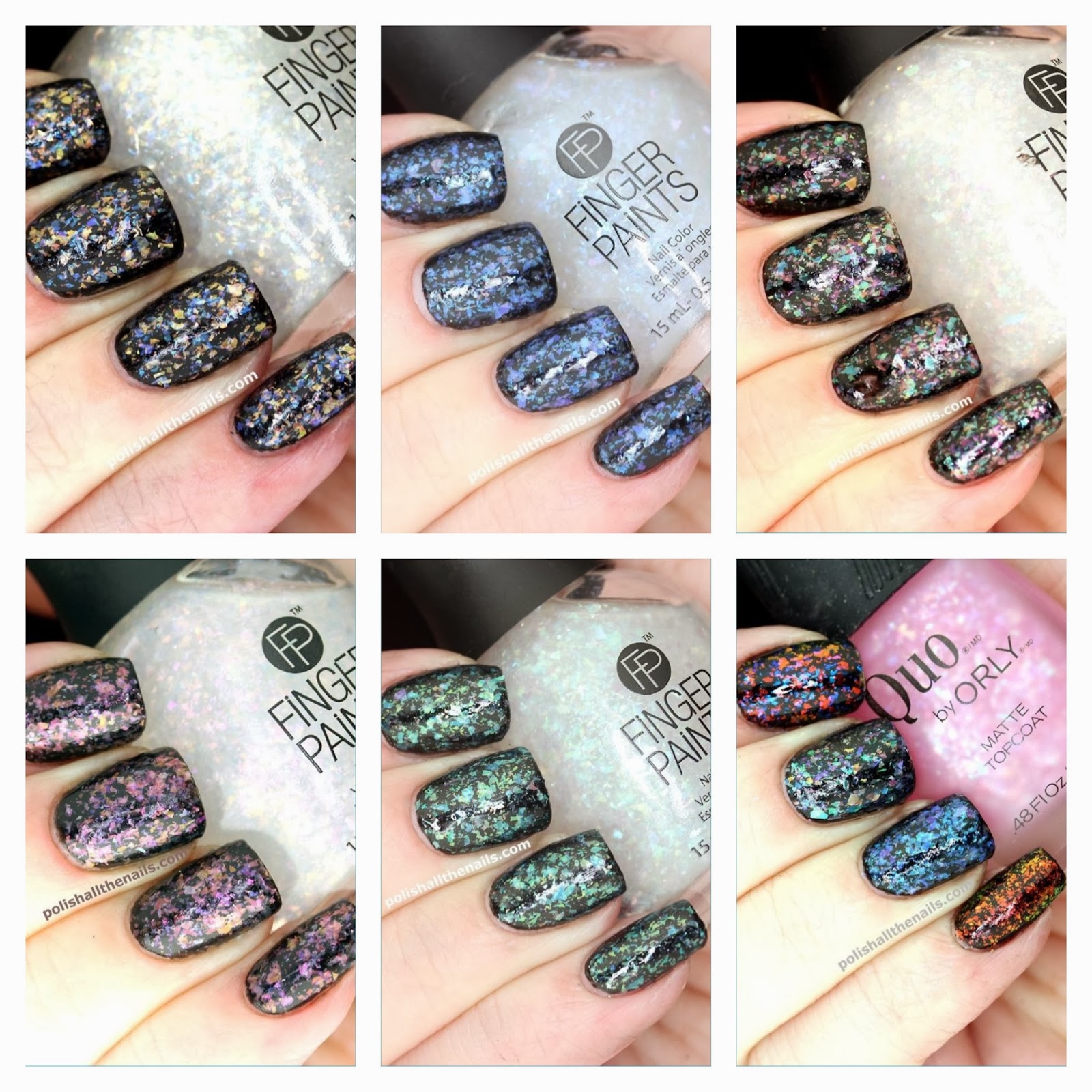 Now we have the upbeat, excited intro out of the way, I get to crush your hopes like mine were crushed.  THESE ARE SO BORING.  I WAS SO EXCITED AND MY EXCITEMENT WAS GROUND INTO THE MUD.   There really isn't anything good to say about these.  For each of these photos I applied two coats of Essie Licorice and then THREE coats of each of the flakies.  I was hoping they'd come to live on the nail but NOPE.  So I can see you'd look at these and think, oh yeah, that's not bad but you need to scroll down.  Let's look at the five new Finger Paints first though. 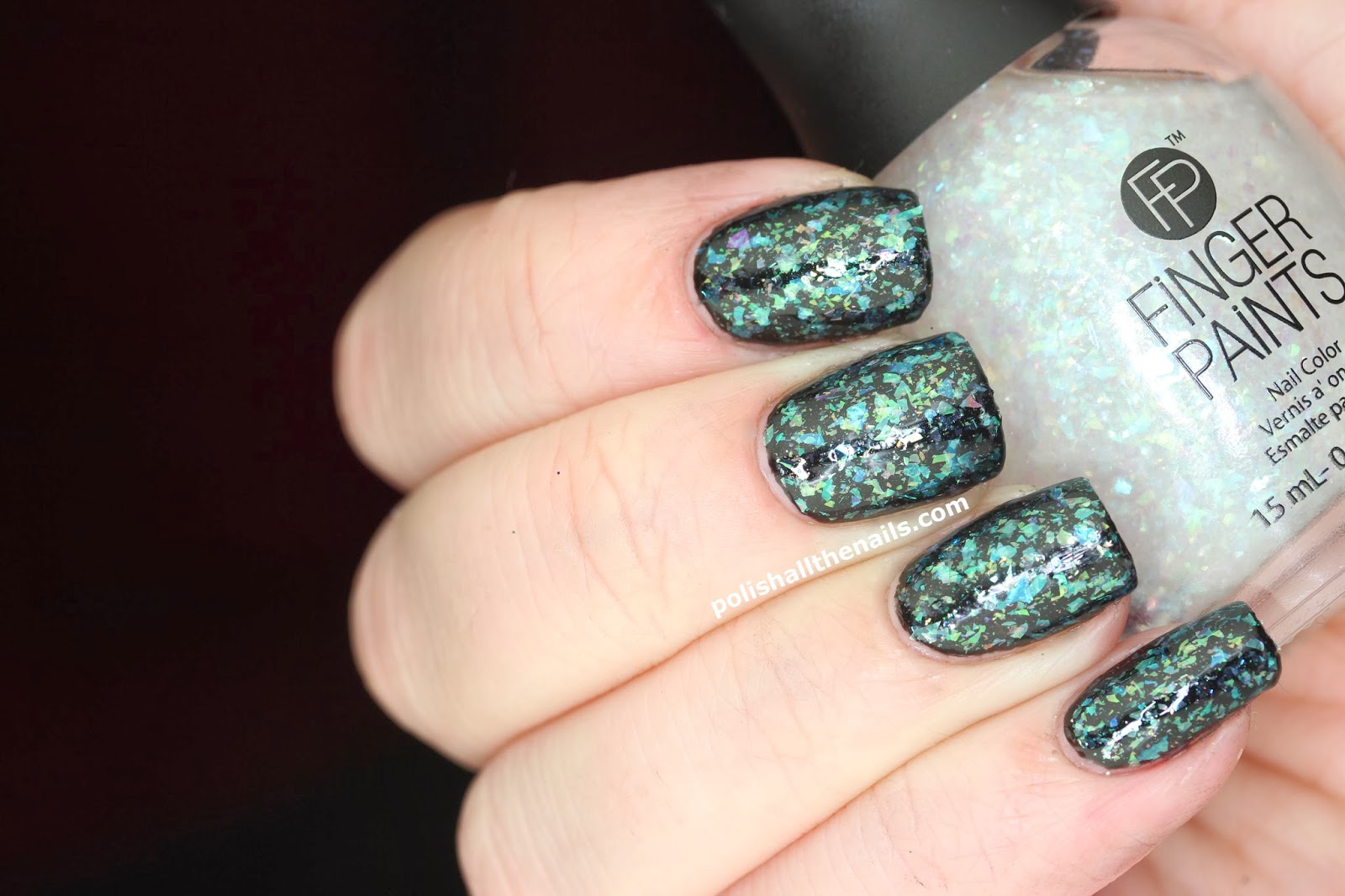 It should say a lot that it's nearly impossible to match the bottles to the pictures because the flakes are so wishy washy.  This is Psychedelic Hue and it's green and blue.  Yep. 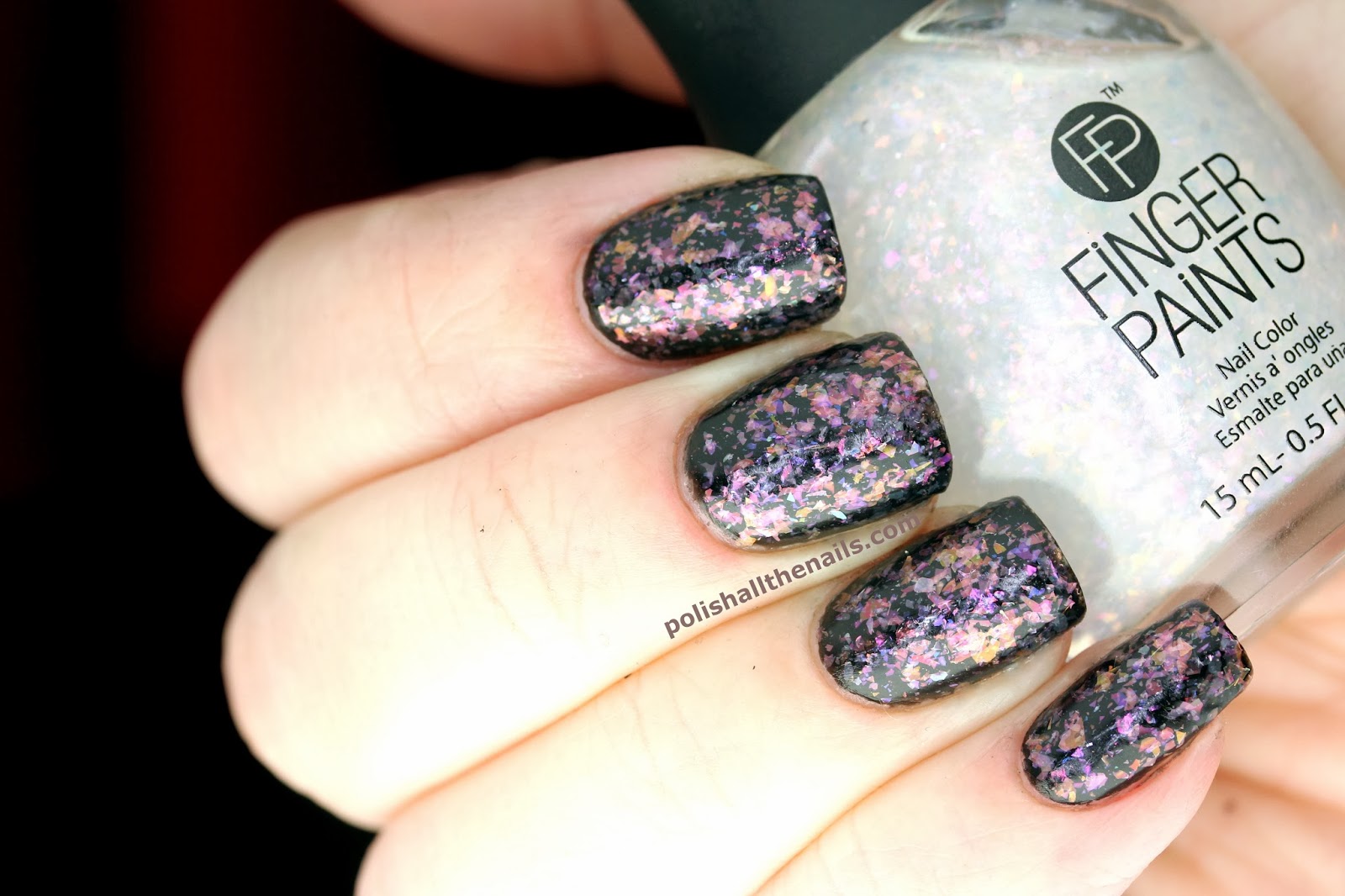 Vivid Reflection is pink, purple and orange.  Not really my favourite, despite the colours being good in theory. 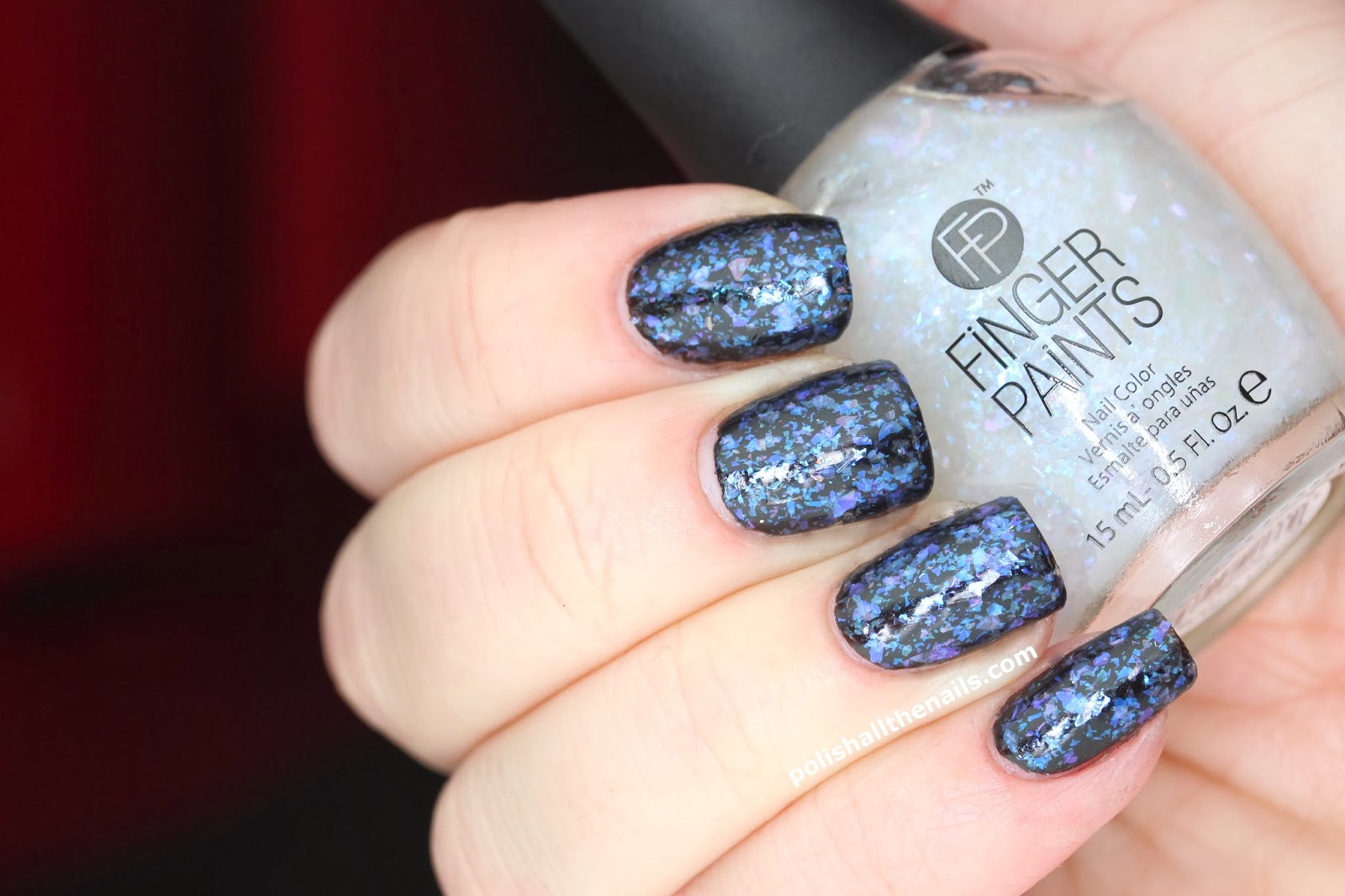 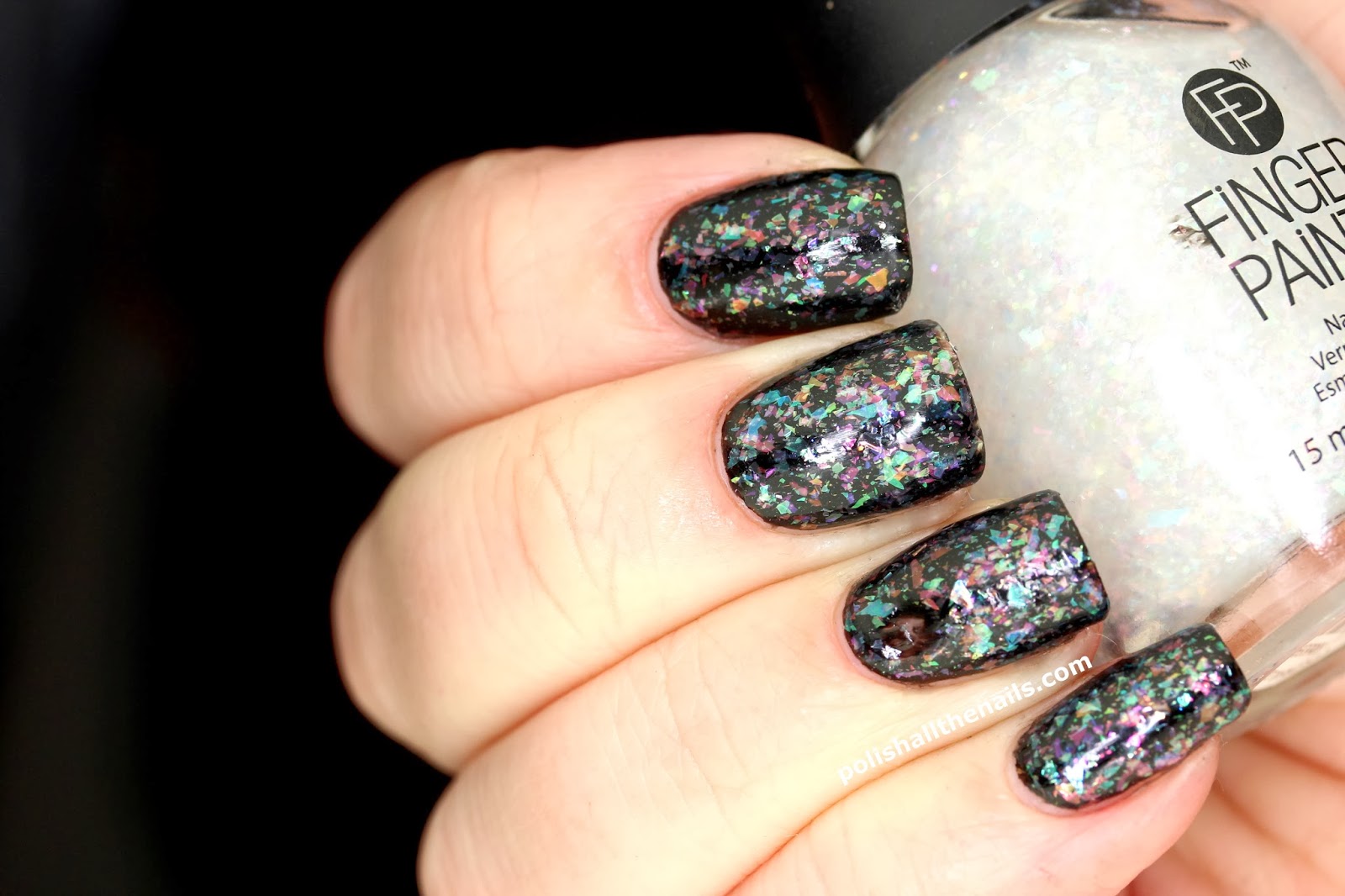 Colourful Dream has lots of colours. 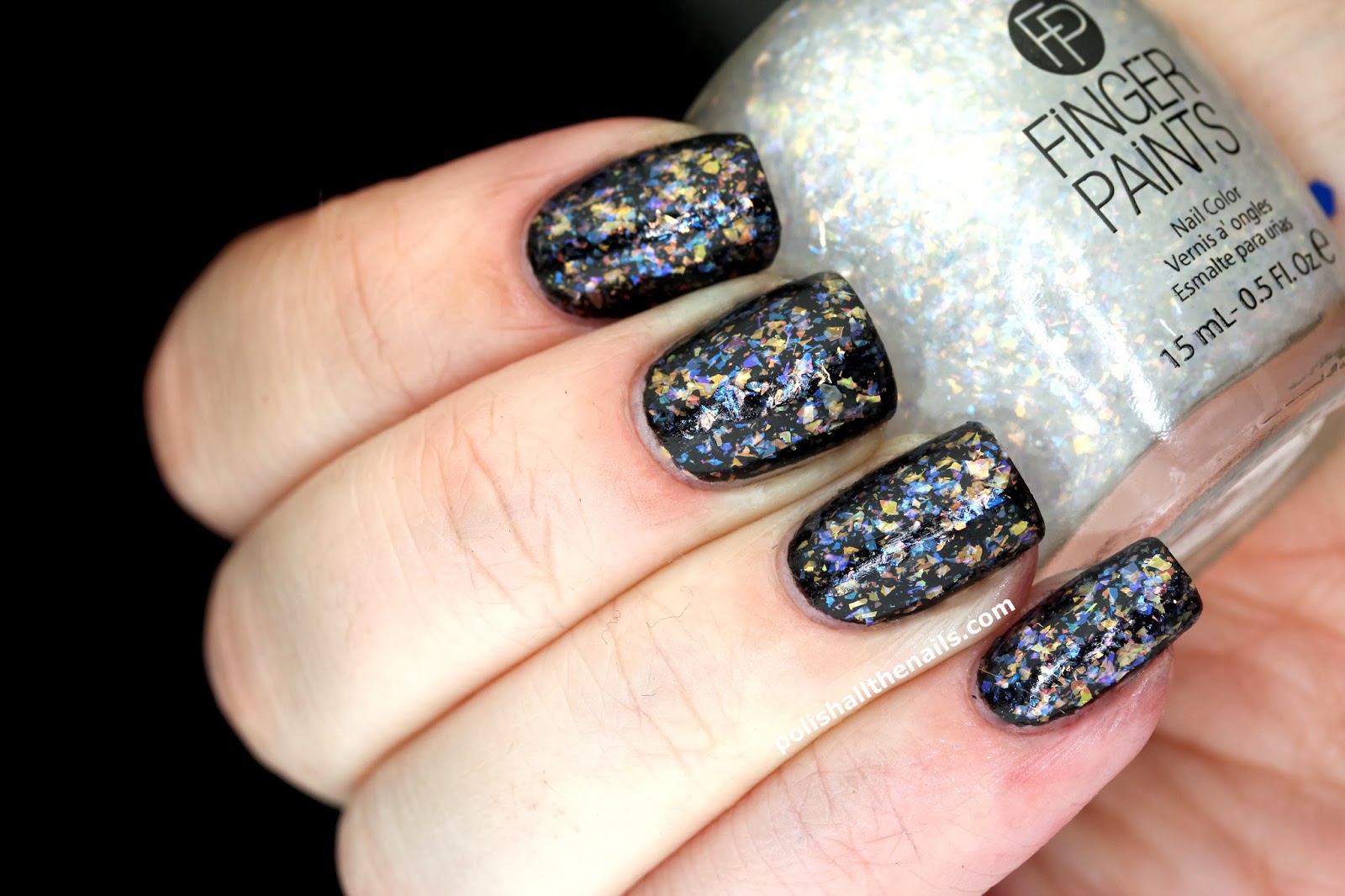 So does Symmetrical Symphony.   Are you ready for why I'm so disappointed?

As an experiment, I grabbed out, from left to right, one of the original Finger Paints flakies, Asylum and tried it against Orly Pink Matte, Orly Blue Matte and Essie Shine of the Times.  Like, holy crapballs.  It's like comparing black and white to colour.  This is just two coats of each and they're just so much better I'm sad.  LOOK AT ASYLUM.  So colourful and amazing and demonstrates why I was so excited to get the new collection.