February 14, 2014
Ok!  So for no apparent reason I haven't been posting much.  There is absolutely no reason other than it's been making me feel vaguely anxious, uninspired and prone to just avoiding posting.  I don't know why this is, after all time.  I have now decided that that is stupid and I'm just going to post every day for a bit.  No challenge timeframe, just for a while.  I have to do things other than glitter placements.  I think that's been part of it.  If it isn't a placement, it isn't as spectacular and then why should I post it?  Therefore I'm just going to post.  Cos who cares.  More nails!  So let's take a look at my first fuck-it nails, shall we?  They're really awesome. 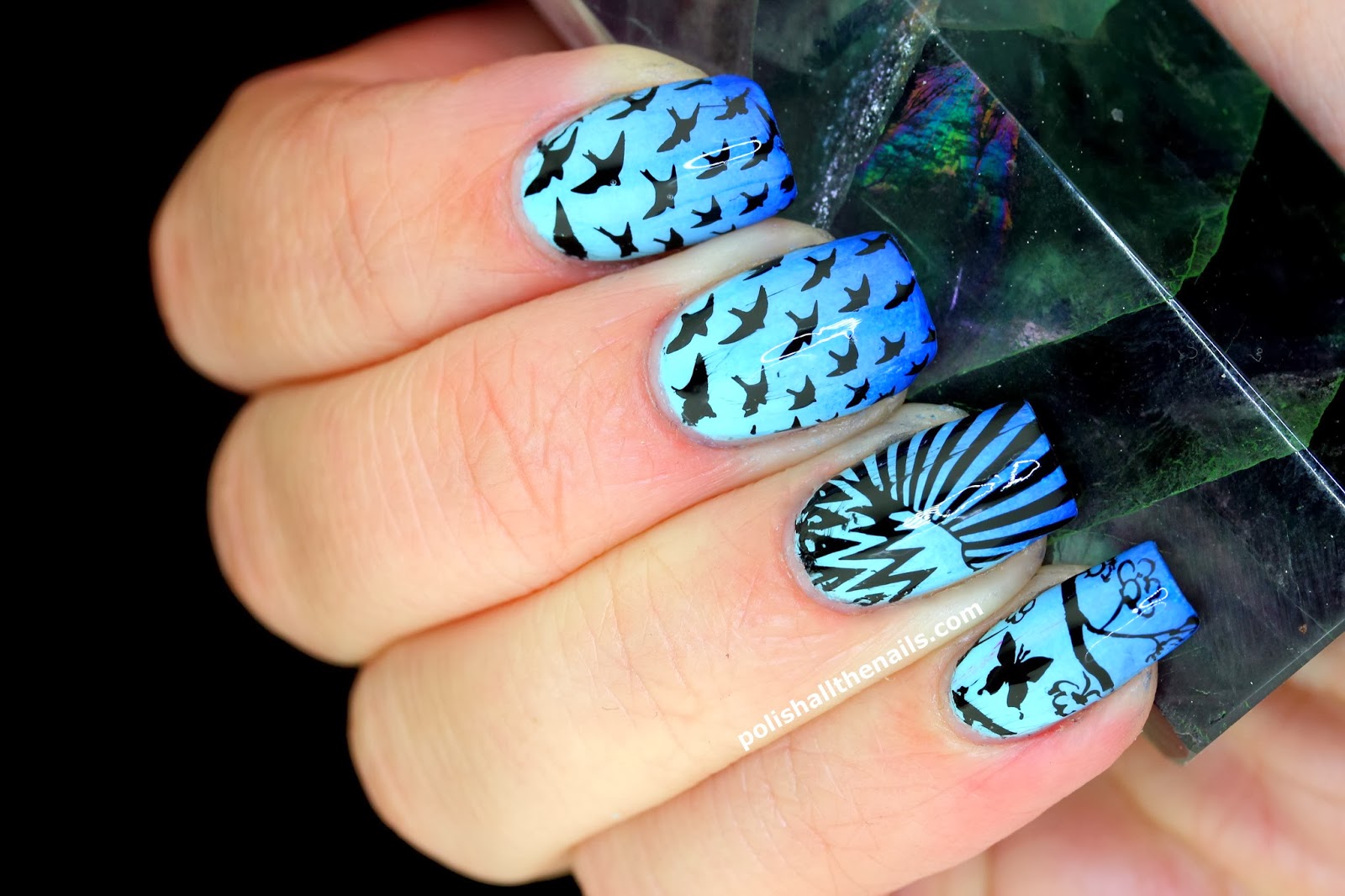 I had a lovely time yesterday hanging out with my friend Kristen, who I met through Instagram.  She is incredibly good at stamping so of course I'm to make the most of her and her amazing Moyou stamping plates.  I have a thing for birds so the Moyou Suki 08 Plate had to be the winner.  Can I just say, I love those plates just because designing a full plate pattern like that is just so impressive that I want to buy all of them immediately.  Birds need sky so I started off with two coats of Urban Outfitters Pixie and layered a gradient of it, China Glaze Electric Beat and Urban Outfitters Blue Velvet atop it.  Using Konad Black Special Polish, Kristen stamped me with birds and flowers.  I hate that my Seche Vite streaked but whatcha gunna do.  Still looks awesome. 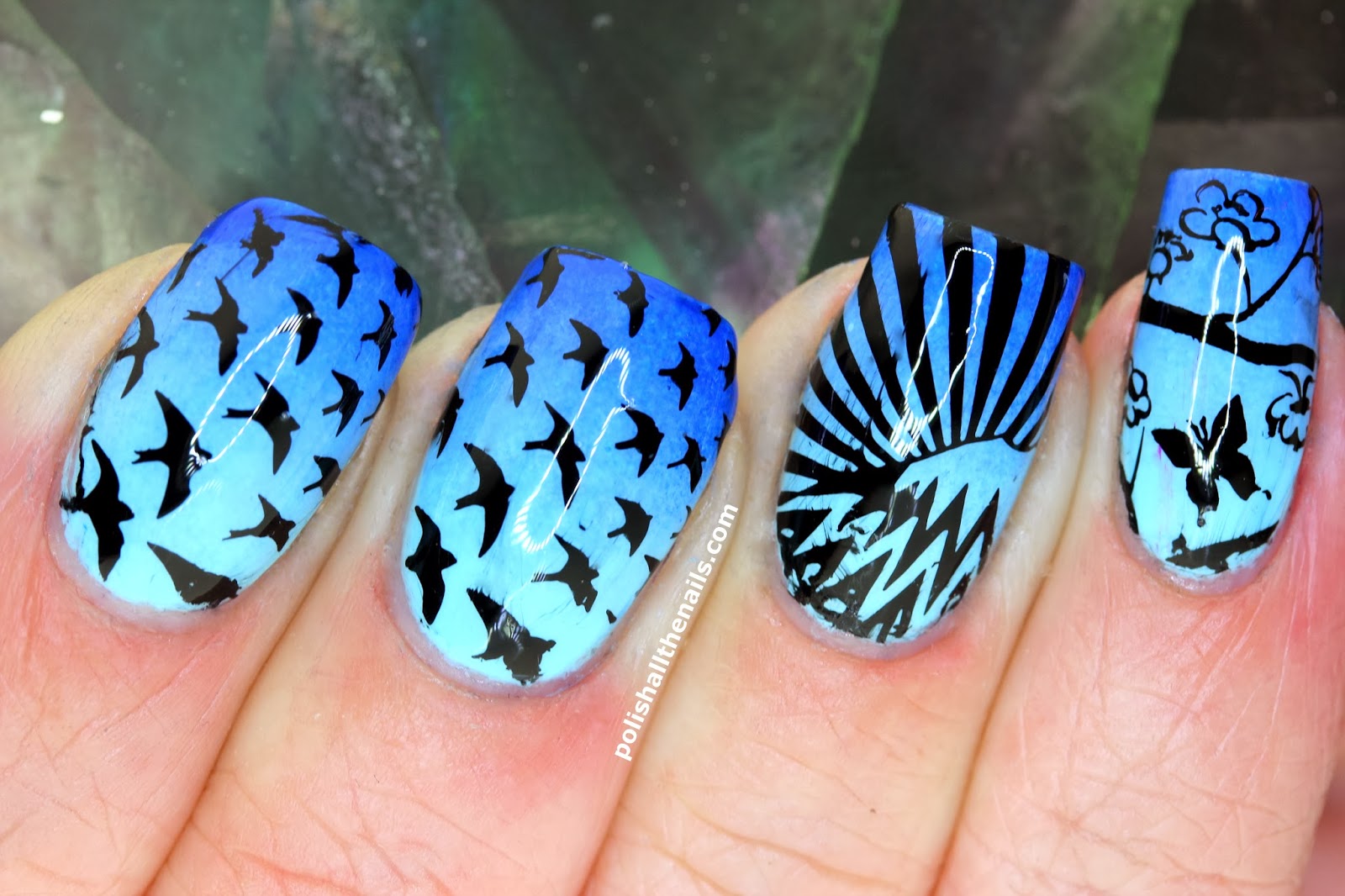 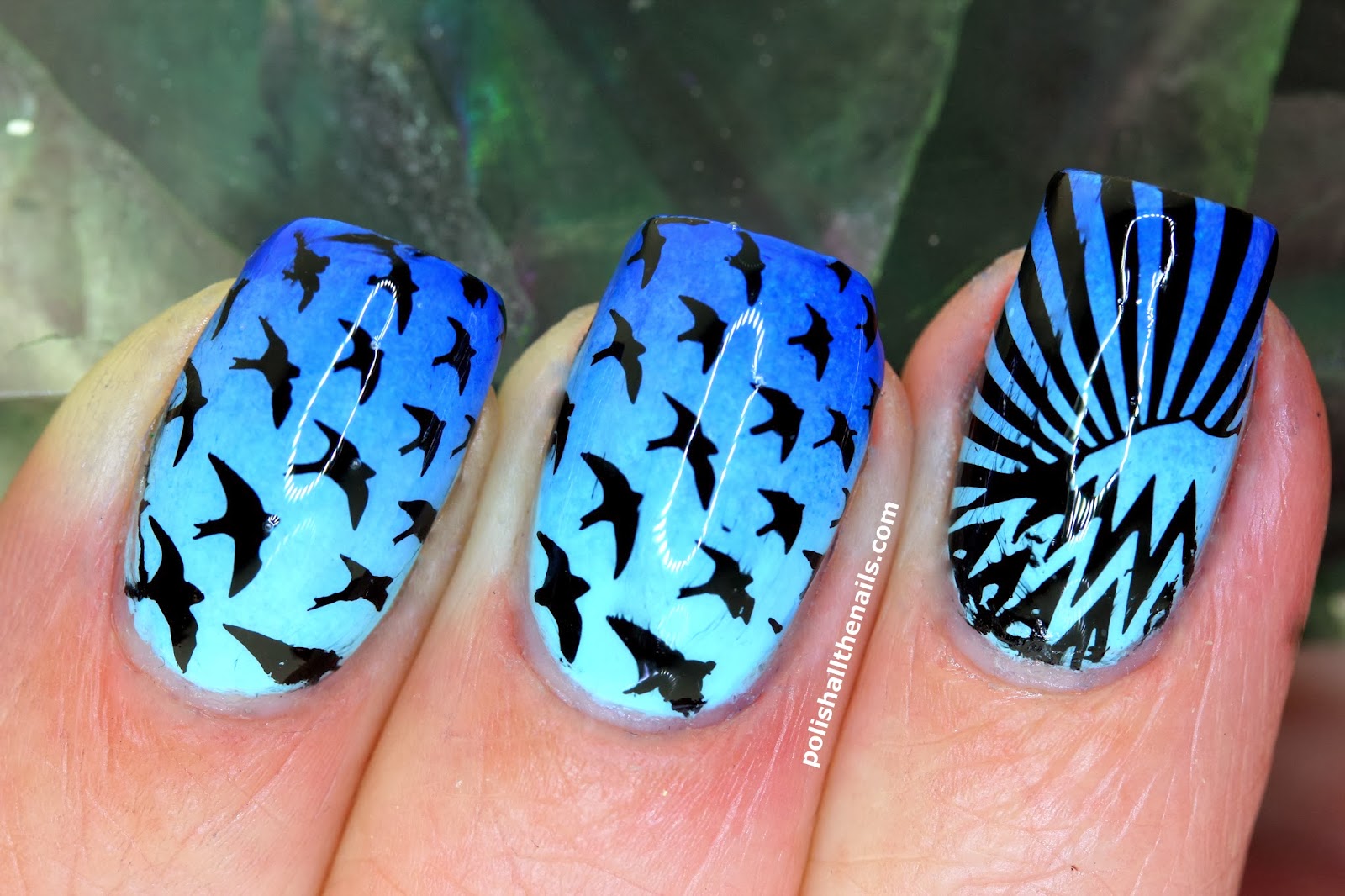 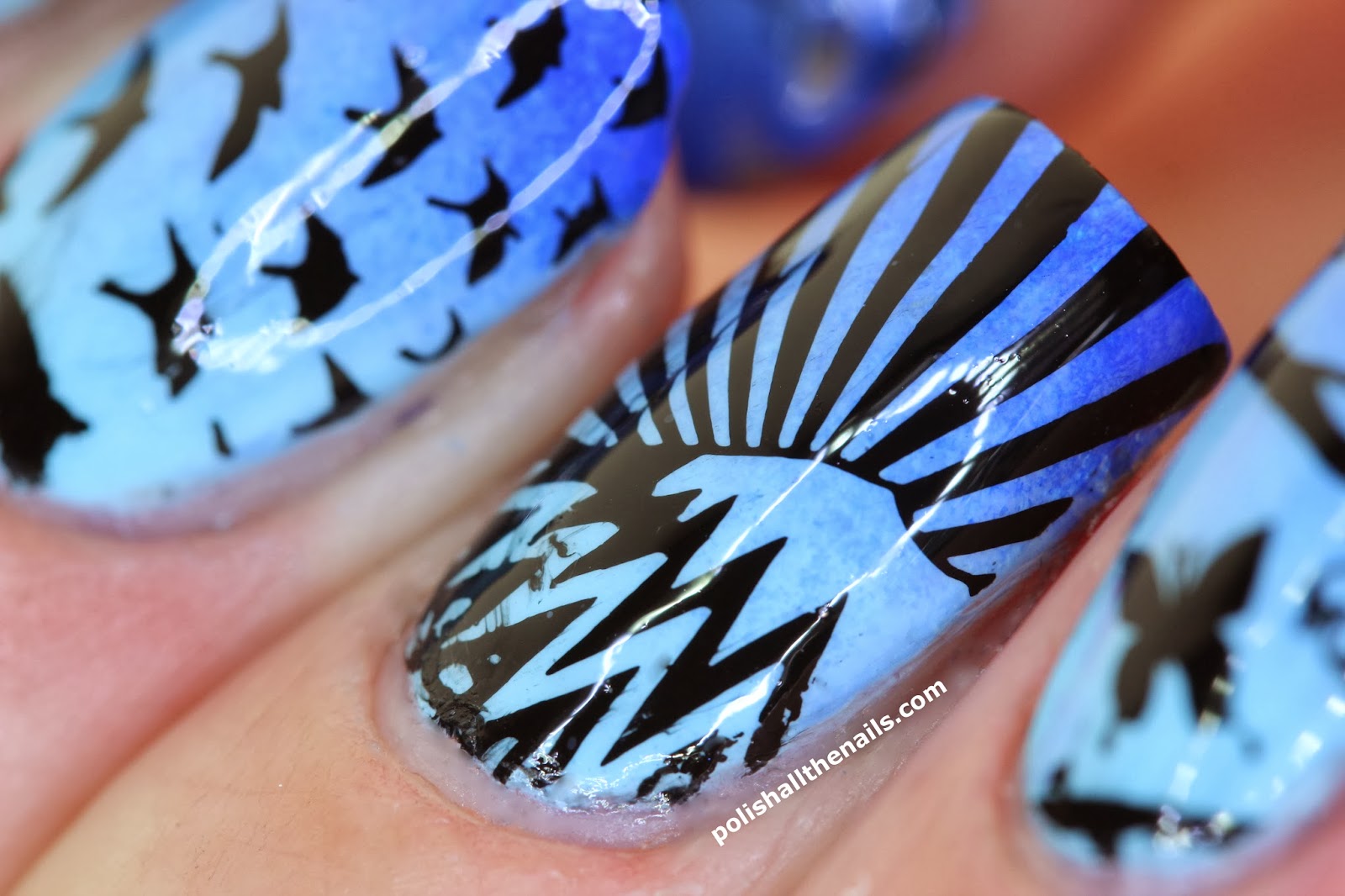 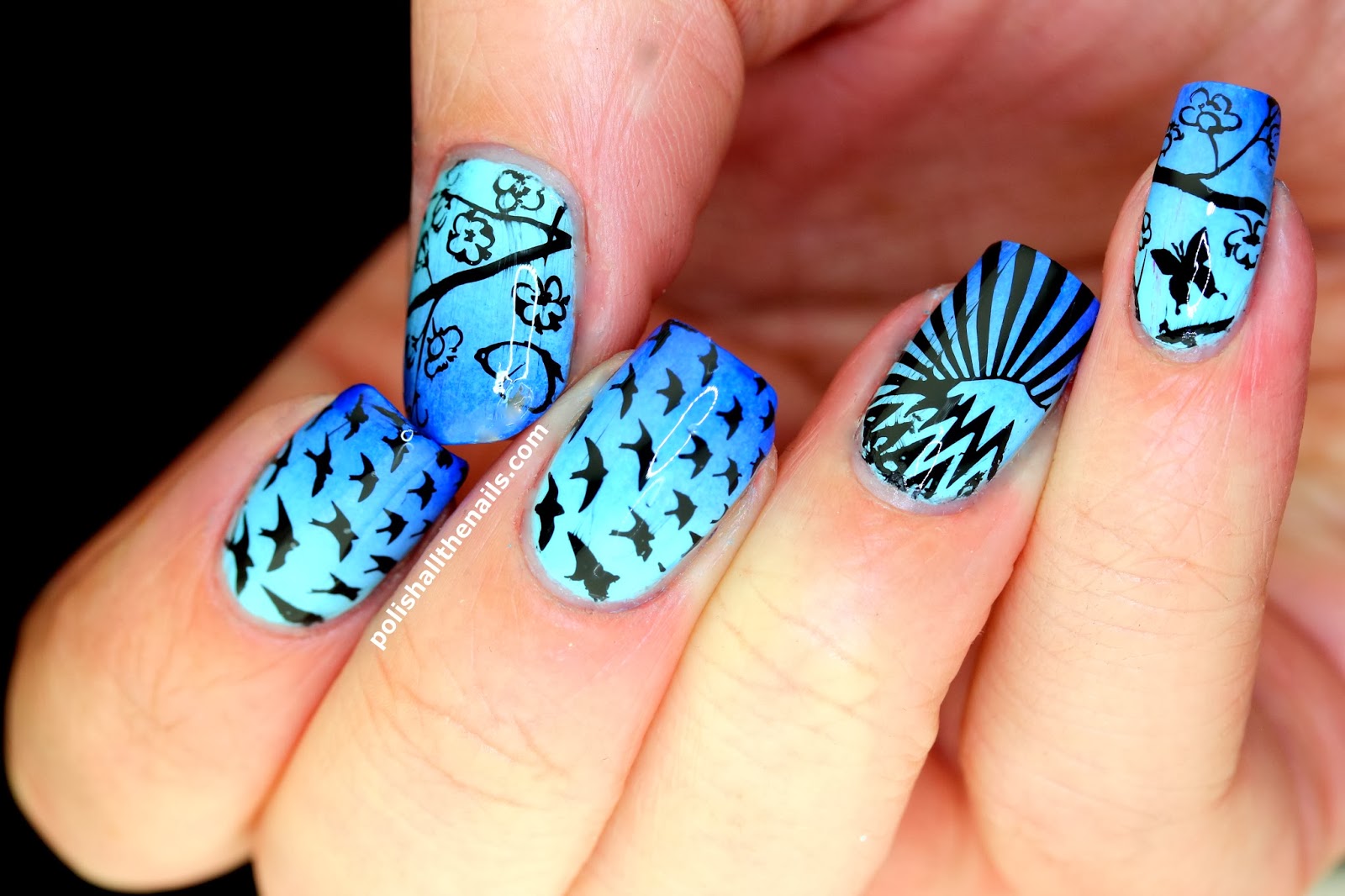 The Verdict:  Love my stamping, gradient and the fact that I'm posting this and it isn't glitter!  I'll be pumping out the simple stuff for a while but who knows, I might discovered another thing like glitter placement!  Thanks again Kristen!