April 12, 2012
Oh Flakies, why can't I resist you?  I was doing so well, managed to go a week without buying any polish and what do you do?  You show up in my Trade Secrets in your Zoya set and whisper in my ear that I've been good, there are only three of us, it'll be fiiiiiiiine.  Just pick me up, pay for me and all will be well.  DAMN YOU AND YOUR SIREN SONG!

Anyway, let's take a look at the three new flakie polishes from the Zoya Fleck Effect Collection - the red flakie Chloe, the blue Maisie and the green Opal. Formula and application was pretty standard for these kinds of polishes, each you see here is two coats.  These flakies are nice but the only real standout in this collection is Chloe. Maisie and Opal are almost exactly the same, to the point where I can't really remember which is which in the pictures below.  Chloe, however, is different even to the Finger Paints flakies, being mostly red with a little green and blue mixed in.  All these pictures are over two coats of Urban Outfitters Winter Berry, which happens to be a great green-blue-purple duochrome. 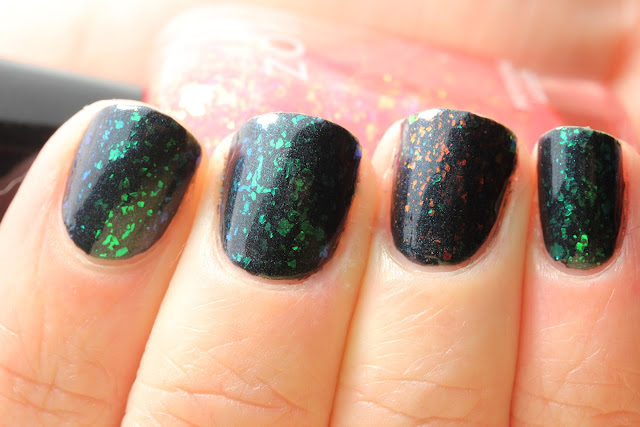 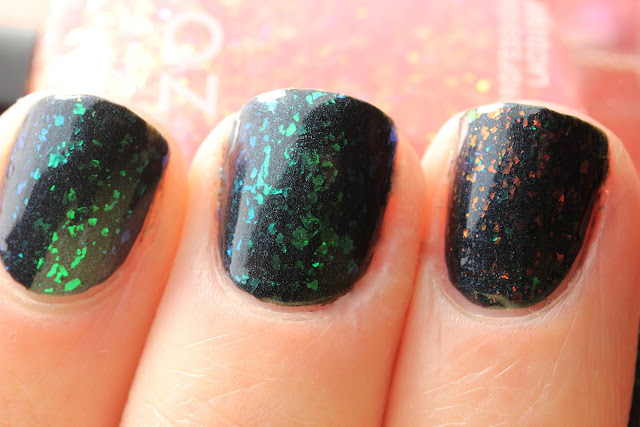 The Verdict:  The two blue and green flakies are nothing special, especially if you already have some from the Finger Paints Special Effects.  Like that was going to stop me though.  Chloe is different from all the other flakies I've seen thus far so it's a safe bet.  Man, I love these polishes so much.

See my Ludurana review, Finger Paints Special Effects and Shine of the Times reviews for comparison.