February 26, 2012
After experimenting with rhombus-shaped glitter in yesterday's green mirror-ball mani, I couldn't help but play with more glitter.  In the same kit as the silver glitter where two little pots of tiny red and blue hex glitter.  They might have been a lot smaller than the silver but I consider this a challenge!  The hardest part was to resist going for a silver base coat as I really wanted to avoid the red-white-blue theme.  Choosing the vivid red China Glaze Winter Berry, I coated up, put on another episode of Criminal Minds and went to work!

Before I go any further, let's look at Winter Berry.  A cheerful, um, blood red jelly-creme from China Glaze, application was decent though a little sheer.  I have such strong stains on my nails, anything other than the most opaque of polishes shows them through.  I should have added a base coat with this one but I couldn't be bothered taking it off again.  A problem I found with this one was that in cleaning up the red went everywhere.  It's still a nice red though.

Once I'd added three coats, I took an orange stick and my glitter and stuck the glitter into the still-tacky surface.  I found that just wetting the end of the stick meant you could pick up the glitter quick easily.  I added the red first in a grid pattern then added the blue in-between.  I can't believe how well this came out.  What's hard to tell is that because all the glitter is lying flat with no polish in the way, it catches the light like you wouldn't believe.  From a distance you can't really tell there's blue glitter on there but when the light hits it: hello blue!  It's like police lights, it's awesome.

Full disclosure:  I only did my right hand as it did take a while.  The other hand has China Glaze Love Marilyn from the Eye Candy glitters collection and it just can't compare to hand-laid glitter! I can't pose with that hand so I'm not really sure why I'm telling you... 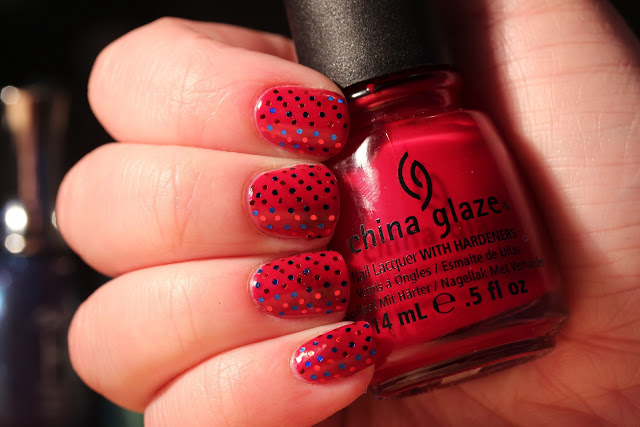 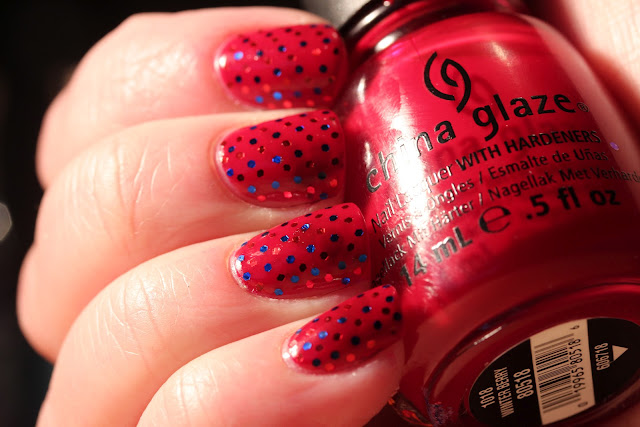 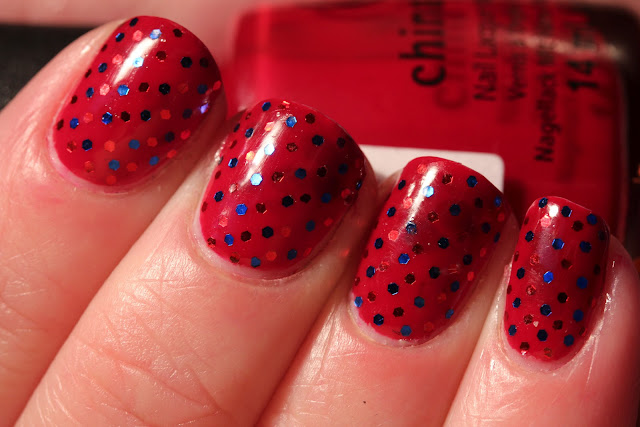 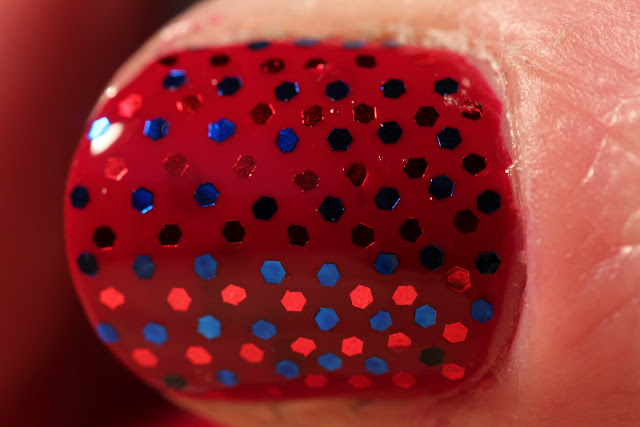 The Verdict:  Like Winter Berry although I wish it was a little more opaque.  If you haven't destroyed your nails, I'm sure you'll be fine.  The glitter on the other hand, <3 <3 <3.  I love doing this so much I spent a good hour or so trying to find big glitter on the internet when I should have been posting.  Who needs sleep!