February 15, 2012
Alrighty everyone, hold on to your eyeballs as we have quite the number of pictures to go through tonight.  As I described in my predominately upper cased post earlier, I found the complete set of China Glaze Pristmatics! After a fun-filled evening of Scrubs and fumes, I've got the first three in the set to show you.

Application was the same for all these polishes so this applies to all three:  it's good.  These pictures show three coats but you really could get away with two.  Don't bother with a black undercoat unless you just want  the one coat.  I experimented with black with the one I finished with (which is now covered in the death throws of Polarized *deep breaths*) and it just meant I had to clean up the edges to get rid of the black.  All of these are completely opaque after two coats anyway, don't bother.

First up, Polarized.  Literally as I'm typing this though, I just knocked this off the table and it's broken at it's incredibly late and I just have to take deep breaths and everything will be okaay.  Lalalalalala yes, at least this isn't my favourite.  FOCUS Laura.  Ok, so Polarized is (was ahhhh) a predominately silver polish with a light blue colour shift.  It's really subtle though.  With the silver - and this is quite the theme - is just about every colour glitter.  Medium sized hexes, small hexes, micro glitter, it's all in there.  Take a look at the close-up, you'll see it.  It's amazing that that many colours manages to focus itself into silver from further away. 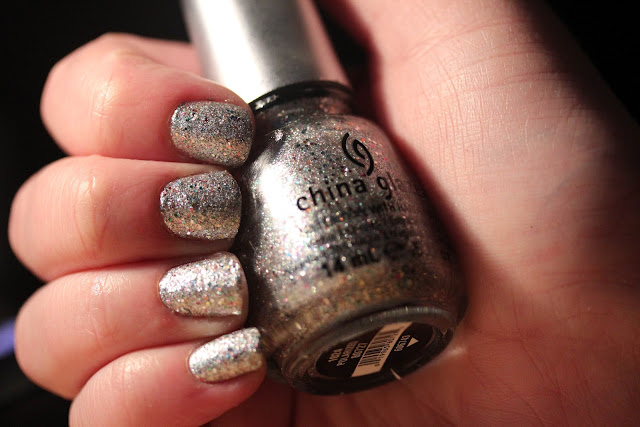 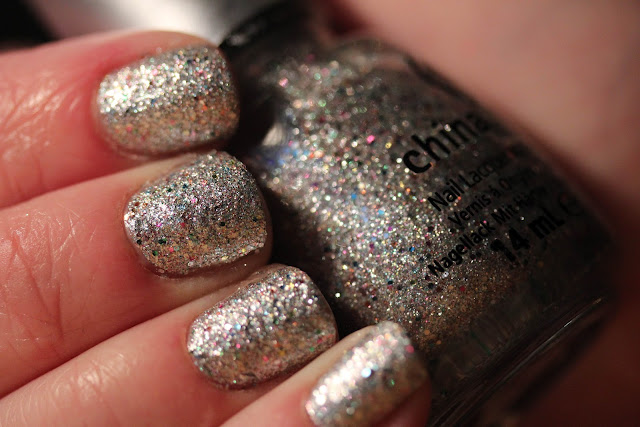 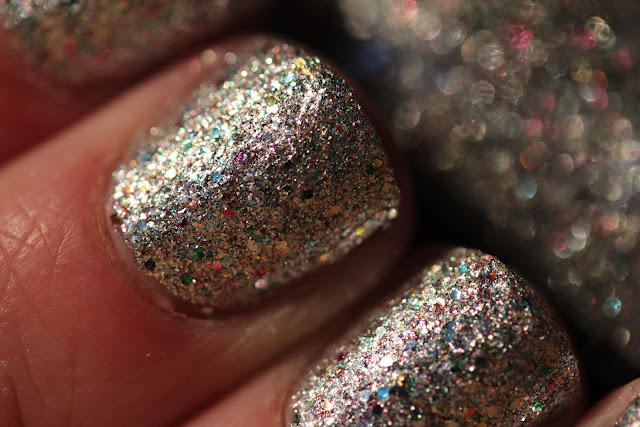 The Verdict:  This one you could probably do without if you didn't want to get the whole set.  The others have a really wonderful oil-slick style duochrome that's so interesting.  That being said, it's an absolutely gorgeous silver, rainbow glitter.


Next up, my personal favourite, Liquid Crystal.  Just like Polarized it's packed full of all kinds of rainbow glitter but this one is special because of the duochrome.  I'm finding it really hard to describe as it's not your normal duochrome where it's one colour in one light and another in another.  This is almost more like an oil-slick in how the colour shifts.  You should really take a look at it in person, it's so interesting.  See how you get that pink shine on my ring finger and the bottle?  So pretty. 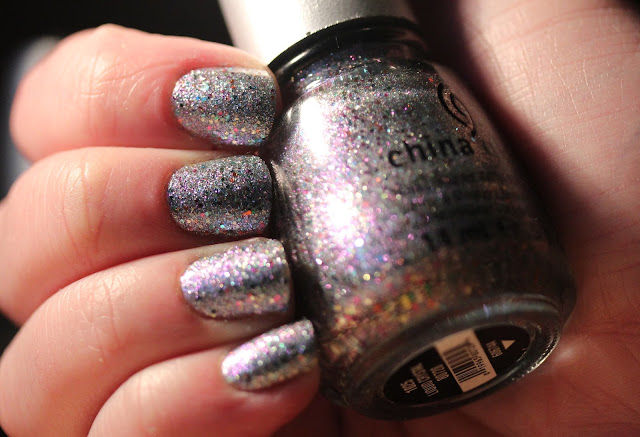 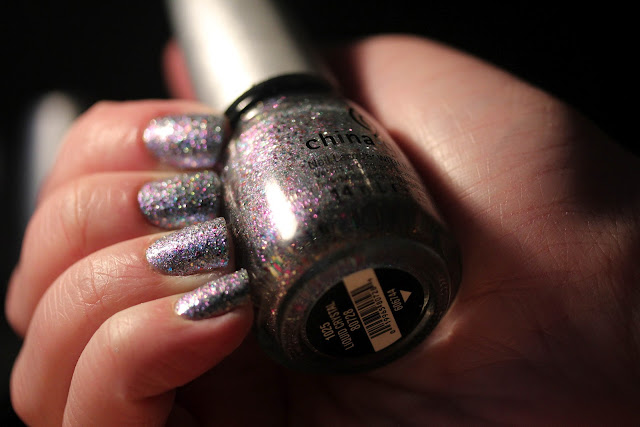 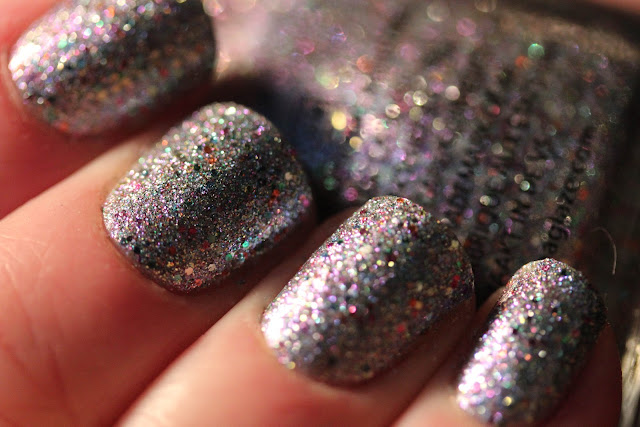 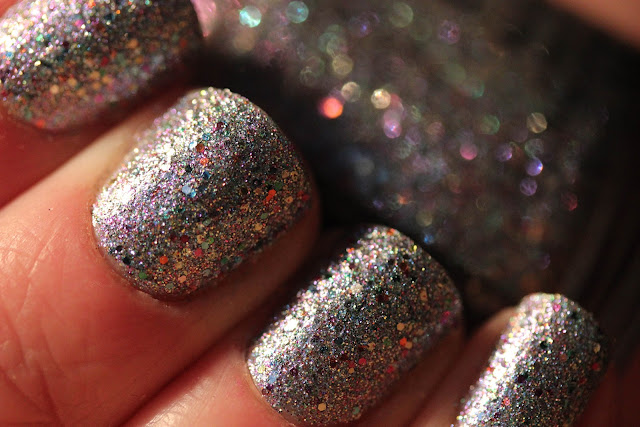 The Verdict:  This is probably my favourite of the collection.  Shifting between blue and pink and so packed full of glitter yet covering completely, I couldn't ask for anything more.  It's different than anything I've seen before which is what I prize most in a polish.


Third from the collection we have Ray-Diant.  The "gold" of the collection, this polish has the same enormous amounts of glitter as the others and shifts very slightly to blue as well as gold.  Really pretty, just like the rest. 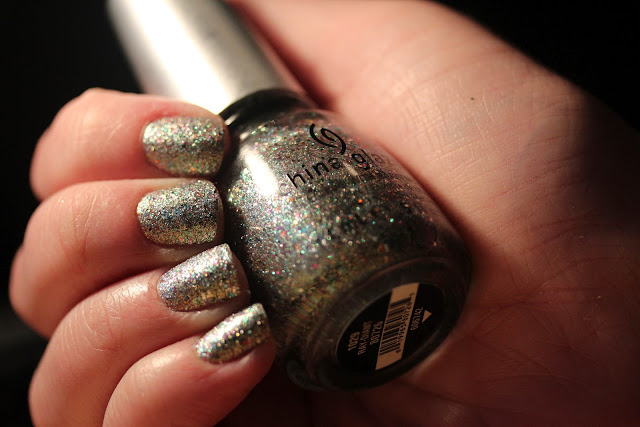 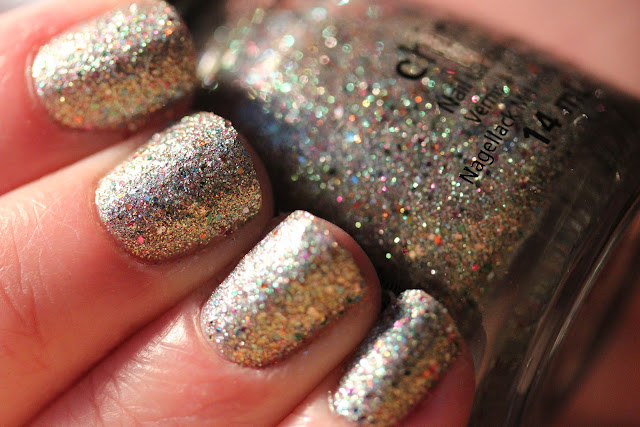 I still can't get over how interesting these are in the close-up. 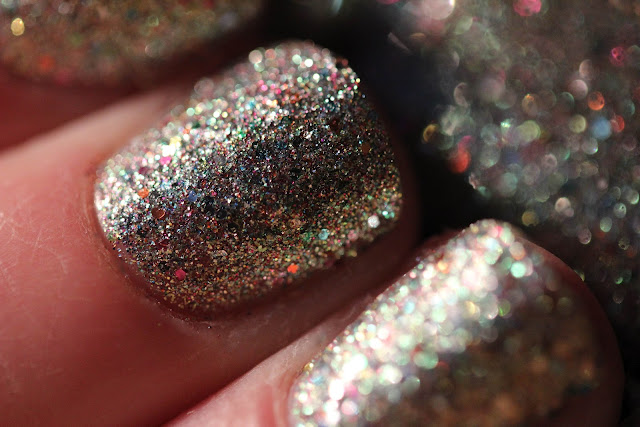 The Verdict:  This one's nice too, but again, the duochrome isn't as strong as Liquid Crystal or Full Spectrum (I'll be reviewing that one tomorrow, hopefully).  Still so pretty though.

The Verdict Verdict:  Omg I love this collection.  I haven't seen any glitters like this before, especially with a duochrome in there.  While I have favourites, if you can, buy the lot as they look great together.  If you can't afford that though, there isn't a massive amount of different between them so one or two works too.  I can't wait to see more like this from China Glaze.