February 14, 2012
As I talked about earlier, I'm so super excited as I got four new Nerd Lacquer polishes in the mail! And omg, are they so different and interesting.  Let's get right to it, so many pictures and things to talk about!

First up, we have the absolutely stunning Hyperspace Bypass.  A bright mustard yellow with silver, black and holo glitter, it certainly meets my awesome criteria by being nothing like anything else in my collection.  Application was really good on this one.  I have really strong stains on my nails and what you see here three coats, reaching complete opacity.  Application was nice, it dried fast and I was able to get a good distribution of glitter without much effect.  Doesn't it just punch your eyeballs in the face? 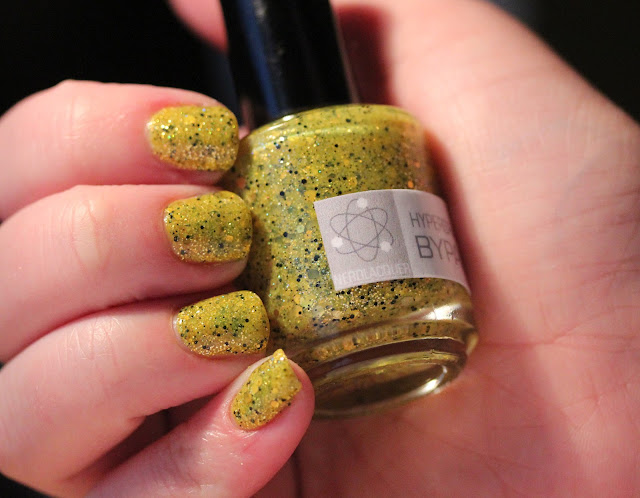 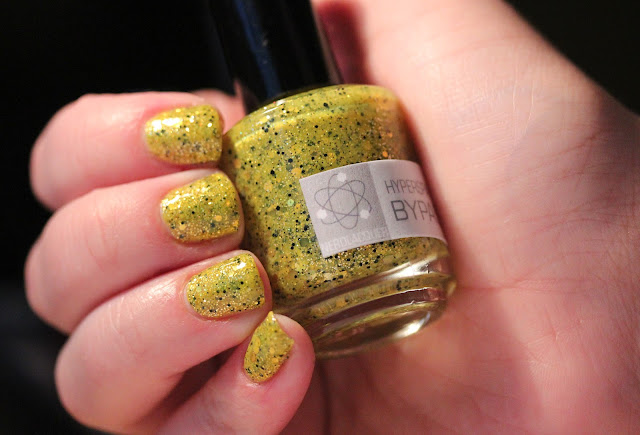 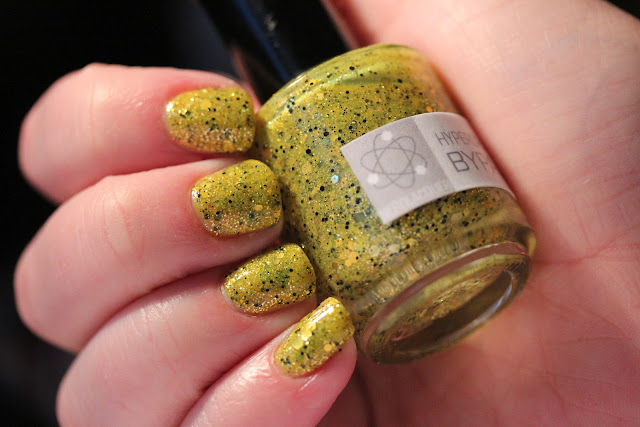 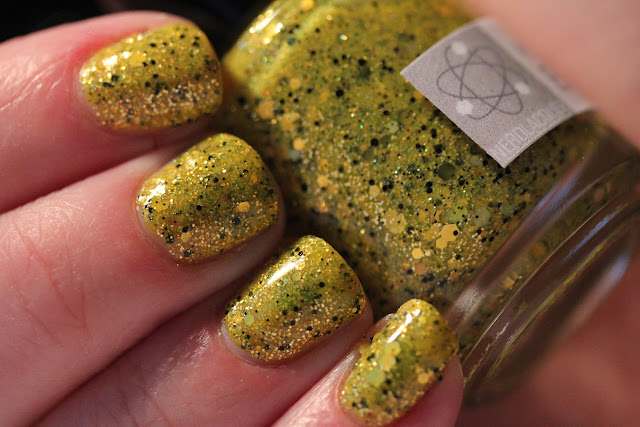 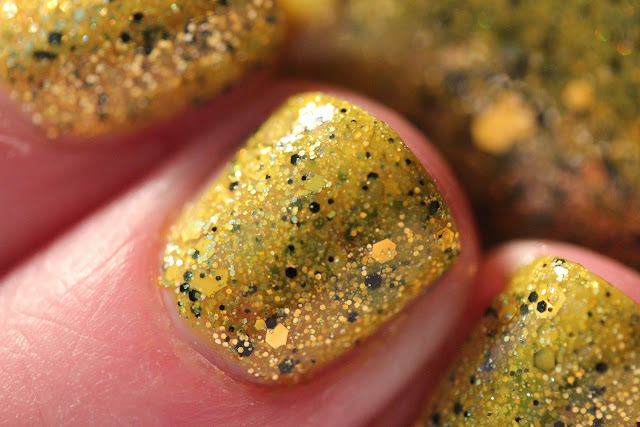 You can see here in the close-ups that it's almost a jelly base with just all the glitter in there.  I like glitters with a coloured base, it means you get all these interesting layered effects. 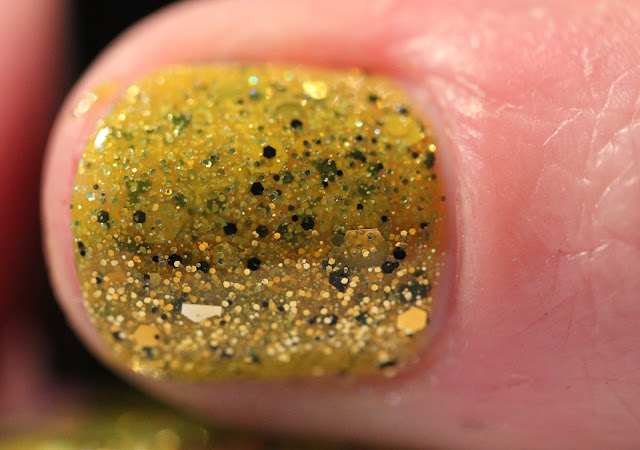 The Verdict: I'm not usually a fan of yellows and even less so of mustards.  This one, though, just so aggressive that it intimidated me into liking it.  Buy this, it's awesome.  Look at that black glitter just sitting in there! Black glitter's the best.


Alrighty, next is Lento III, a polish with an olive base and square (!!!) glitter in blue, gold, black and green.  Application was also really good on this one, what you see here is only two coats and it covers perfectly.  Also like Hyperspace, I didn't have to do anything special to distribute the glitter.  Much like yellows, I'm also on the fence about greens.  This one just doesn't have the punch to tip me over to total love like the first but I like it, again, because it's different.  Give me anything but hex glitter and I'm sold! 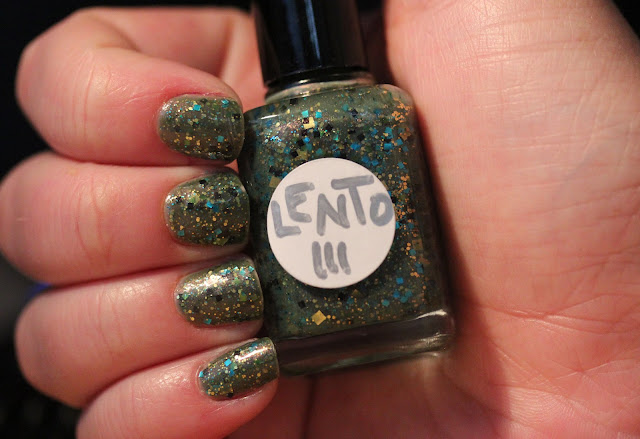 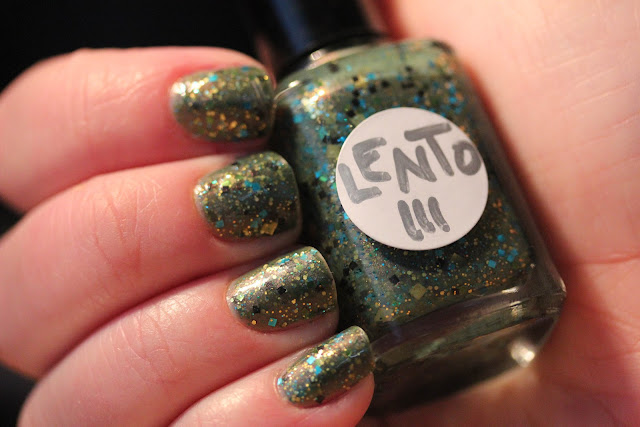 You can see here on the close-up that the base is also more a jelly here.  I think this one might be better over black as it's just very olivey-brown on the close-up and that's not reallllllly my cup of tea. 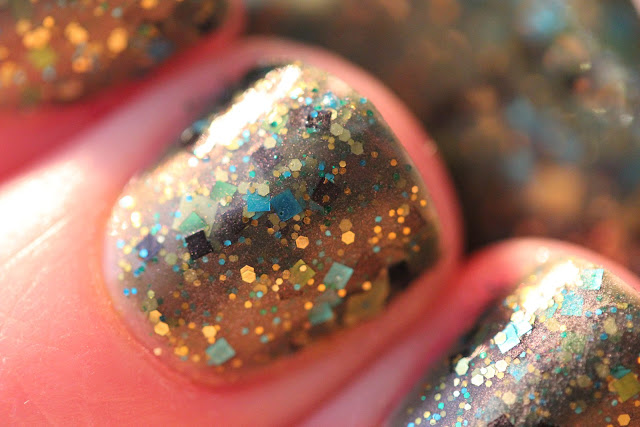 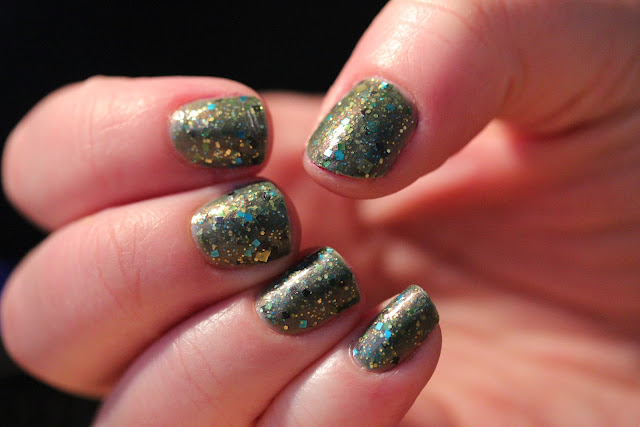 The Verdict: Screw it, buy this one too as it has square glitter!  It would look really good with one coat over black, I know it.  I will never dismiss a polish that tries to do something different!

Total Verdict: I <3 Nerd Lacquers.  You can only see one colour hex glitter in large and small in a clear base before you just get sad at the lack of originality.  These push the boundaries, innovate and are totally awesome so go Nerd Lacquer!