January 15, 2014
I don't know about you guys but I do my nails every day.  Unless I'm sleeping.  Then I do them when I wake up.  Anyway, given I post only sporadically, that leaves a lot of nails I do but don't post.  They're even usually pretty complicated!  Just somehow, somewhere in how the photos came out, my colour choices, my execution or the way the wind is blowing, they don't get posted because they're not the best they can be.  In the interest of transparency, let's have a look at some that didn't quite make the cut. 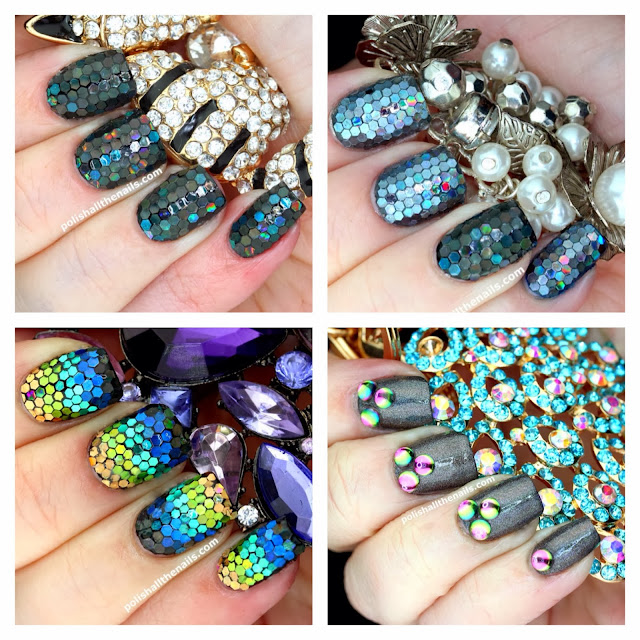 I swear, black holo glitter will be the death of me.  It looks so amazing in the bag but then on, it's just...flat.  I've tried multiple brands in different shapes but just...eh.  I'm happy with the execution of this glitter placement, but just try to get excited by how it looks in the pictures here.  I'm happy I could capture the rainbow in the finish - thanks to the external flash provided by my bf - but I just don't like the colour. 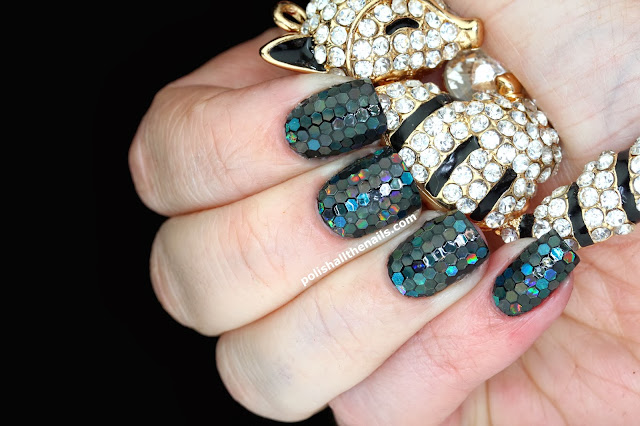 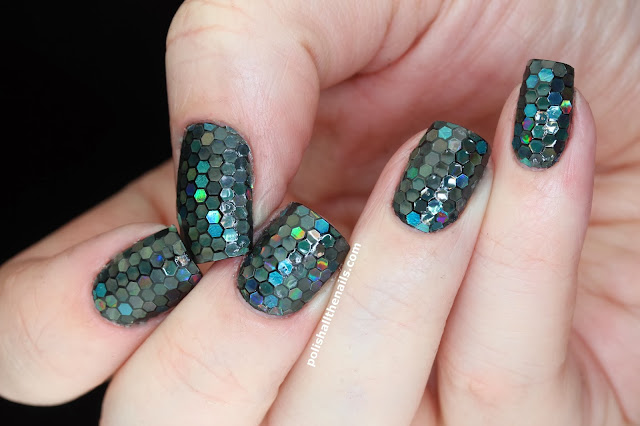 Next, another example of the same glitter being boring on the nail.  This was a trial run for New Year's and I'm so happy I went with black and silver squares instead.  Same amount of effort, significantly better result.  I like the grey glitter more than the black but it's a case of it being amazing in the bag, boring on the nail, under top coat.  I could show you pictures without top coat but I don't feel that's terribly honest.  The gold is better but overall, just boring. 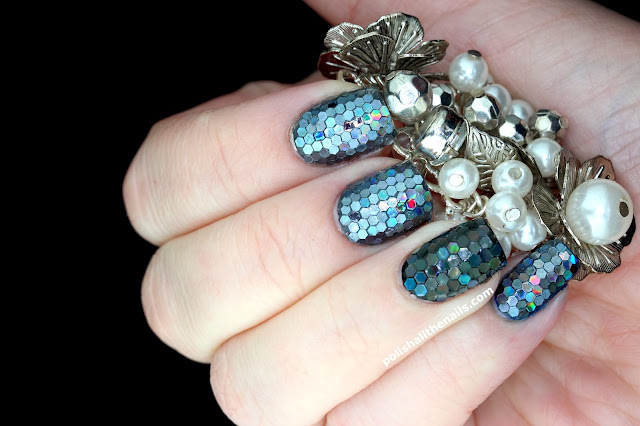 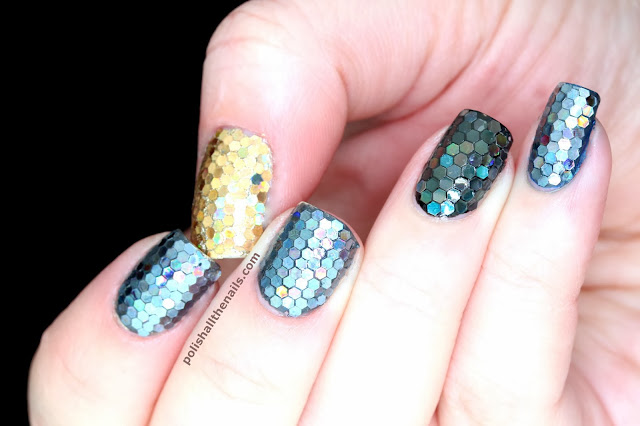 YEP, HAD TO KEEP TRYING THE STUPID BLOODY BLACK GLITTER, MAYBE IT WILL WORK WITH OTHER COLOURS IN A GRADIENT.  A resounding meh.  I've since discovered that a different gold really fixes this gradient so that's a good thing.  I actually filmed this for a tutorial/time-lapse but some of it wasn't in focus and I didn't do a particularly stellar job placing the glitter.  I'll film it again soon.  Gotta update that tutorial. 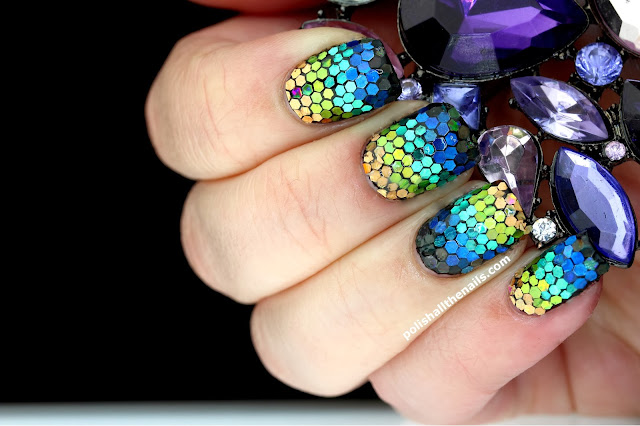 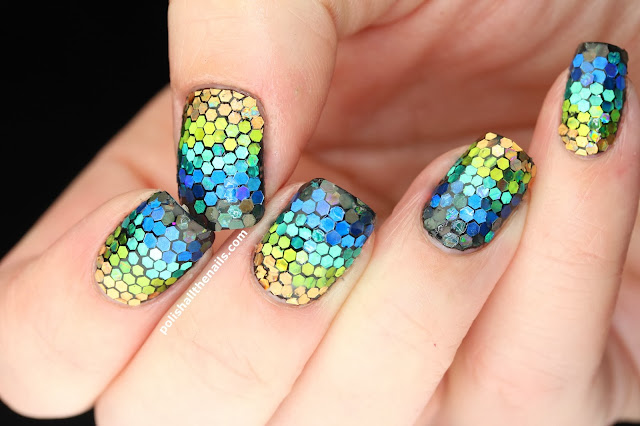 Oh, crazy giant rainbow studs.  You're so crazy and giant and strange-looking.  I paired them with A England Bridal Veil but it's not the right base colour for this.  I do really like these studs because they look like alien eggs but with this base colour it's just, again, kinda meh.  I also only made it to 11am before I picked them all off my nails.  Yep, I'm that person.  I also don't like it when my skin comes out this greyish colour because my white balance is off. 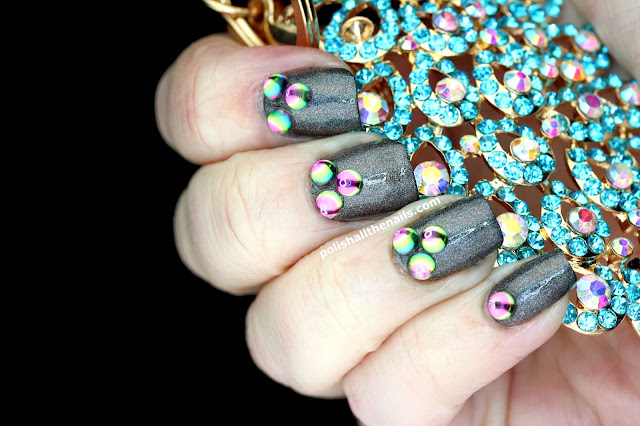 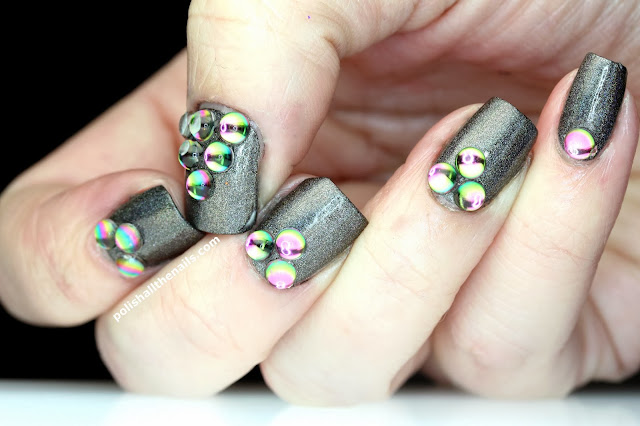 The Verdict:  I know there's really nothing wrong with any of these manis and I'm basically just complaining but I like to show you guys the best work I can do.  I swear I'm not just fishing for compliments, I just like to be transparent with you, talk through what doesn't work and do better!  Always better and sparklier :D:D